skip to main | skip to sidebar

A first hand impression of the HK Umbrella Movement 2014

Introduction: A Collection of Raw Images
I was visited by an overseas couple on October 28, exactly one month after the day of tear gas, a Hong Kong scene that shocked the world. The man was my university friend. I accompanied them to the occupied zone in Admiralty. After that, I showed them my sketch book to let them have some idea about what had happened before their arrival. I didn't know how they felt at that time – it was just a few hours after their 16-hour long flight from New York. But I have to say, flipping through the pages of my sketch book, I myself felt the rawness of the images.
Up to that time, I had already had nearly one hundred sketches of the Occupy movement, about 70 in that sketch book. I started them on September 27, a day before the tear gas struck. On that day, I was invited (better said enlisted) by a group of cartoonists, the Comic Daemons, to make cartoons or sketches of people in a shopping district. Their intention was to arouse public awareness, through a day of street art, about the anticipated action of occupying Central, Hong Kong's central business district, to protest the government's deceitful political reform plan. The unannounced target day of the action was October 1, the National Day of the People's Republic of China (PRC), because, as known by all, Hong Kong's political reform was in fact hampered by the PRC regime.
I am not a cartoonist, but I took part in the Comic Daemons' exhibitions in support of their effort to promote democratic reforms in Hong Kong. I do brush-and-ink painting and woodcuts. Joining their cartoon exhibitions, I could only make some cartoon-like pieces for show. On the day of street art, I was enlisted to do a two-hour session together with other cartoonists, but I did hardly more than one and half. Unlike the others there, I was relatively slow, completing about a dozen sketches in my own session. All of them were given away on the spot, except two. One of them happened to be the sketch of the cartoonist Zunzi and a common friend of ours. In its raw state, the sketch was no more than a few pencil lines. I gave it a retouch with felt-tipped marker later in my studio. 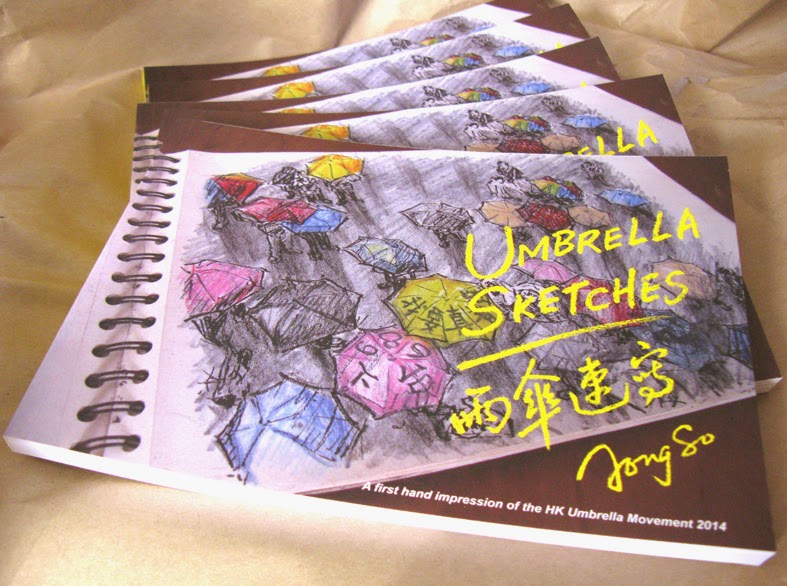 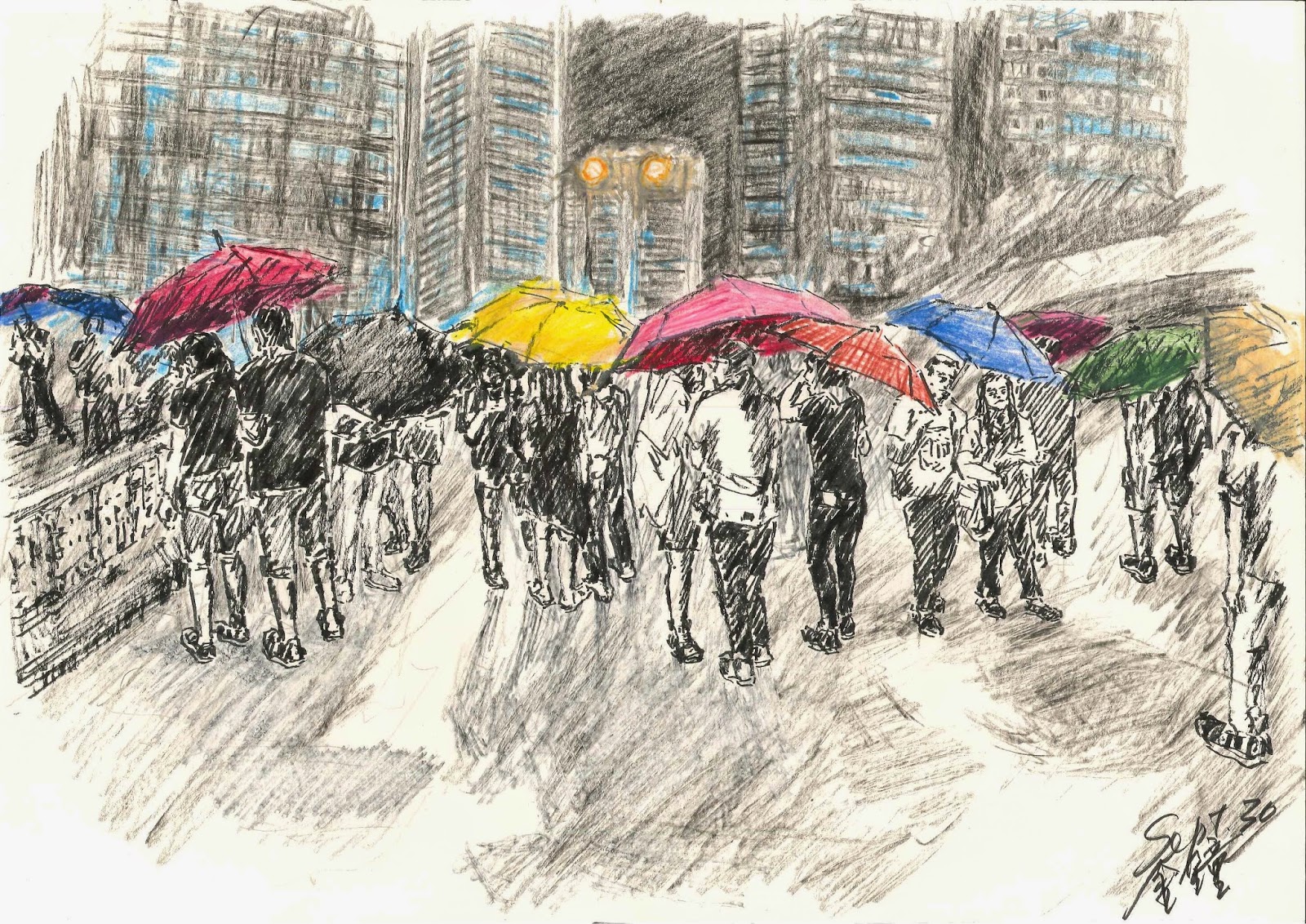 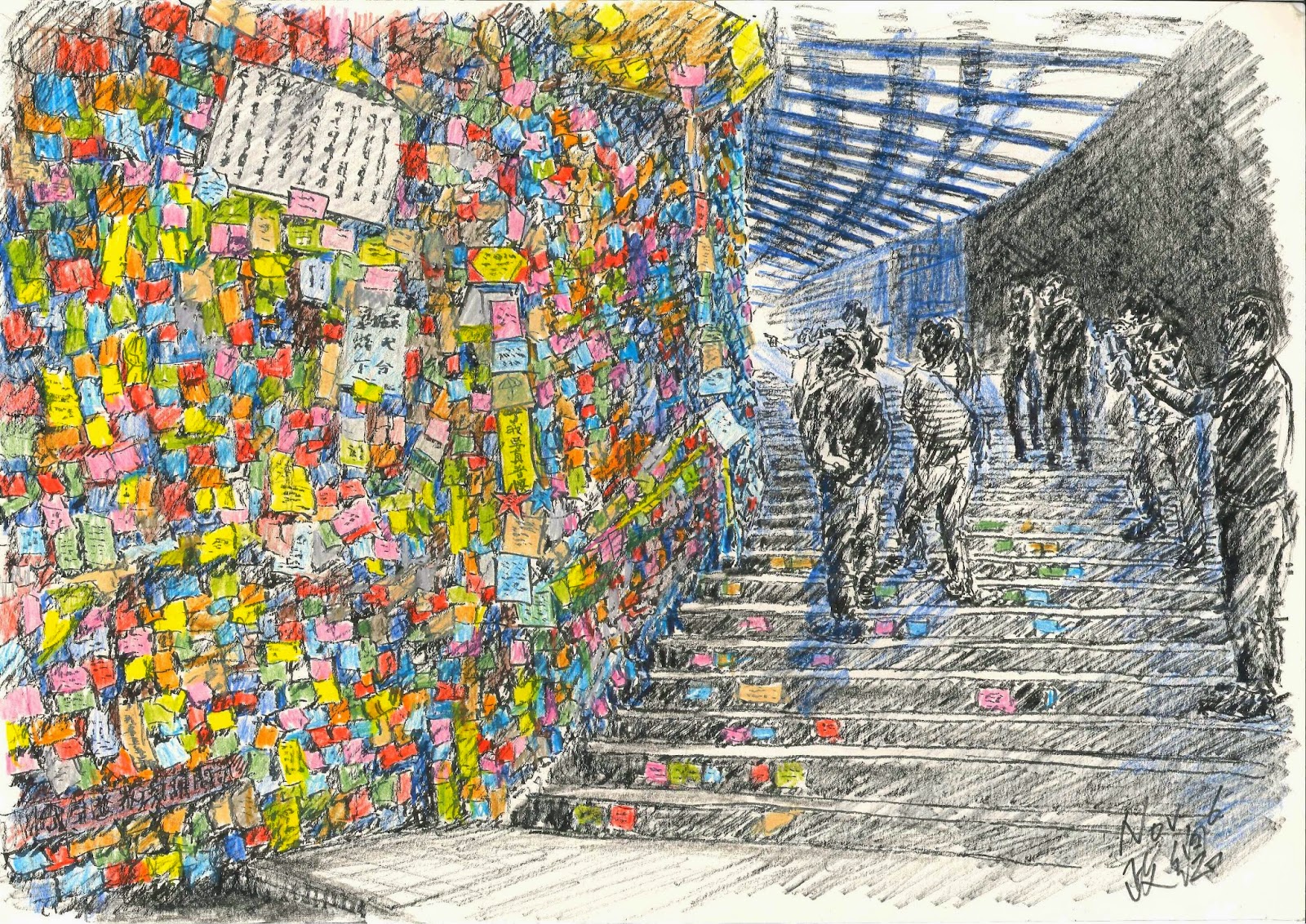 It was the September 27 drawing session on the street that gave me the idea to make sketches for what would happen later on. In that evening, I brought along my sketch book to a rally outside the Government Headquarters in Admiralty. However, I found it was too dark and too crowded for me to work there with my sketch book. And, I must admit, the atmosphere was too tense. So, I only took a few photos that night.
On the next day, I went to the rally in Admiralty again. It was bright enough during daytime, but I could jot just a few pencil lines on several sheets and left everything unfinished. Later, when I was out on Harcourt Road among thousands of protesters, I found most of them were preparing for the possible actions of the police. I was too nervous to take my sketch book out again from my backpack. Soon, the first round of tear gas came. Then came the second and the third round. That night, after several rounds of tear gas, I went back to my studio at midnight to work from the photos. I had a sleepless night, working until noon the next day.
Things went better for me after the day of tear gas. I could visit the occupied zones and do sketches at ease. To save time, I tried to draw on the spot very brief outlines of what caught my attention with a pencil and took a photo for detail. The unfinished part was left to be done later. Within a week, I found my old sketch book, some 120 sheets, two thirds blank before the day of tear gas, almost completely full. I also found I had failed to catch up with what I saw even though I worked non-stop days and nights. I had so little sleep that I was totally exhausted. Thereafter, I resorted to record what I saw with my camera and do sketches at a slower pace.
This book is a collection of nearly all the sketches I did in a period of less than two months, from September 27 to the moment the police were about to clear the occupied zone in Mongkok. They are all raw images of what I had seen before and on the day of tear gas, and later on, in the three occupied zones in Admiralty (outside the Government Headquarters), Causeway Bay (Hennessy Road) and Mongkok (Nathan Road).
I have thought of turning some sketches into brush-and-ink paintings or woodcuts, but some friends encouraged me to put the raw images together to make a book. Knowing that financial support for this book project was essential, some of them even agreed to order in advance and in bulk. My heartfelt thanks to them.
I have also thought of doing a more complete book of sketches covering later dates, but friends strongly believed that I should not wait: “Do it now! And a supplement later.”
By the time I compiled this book, the Occupy movement was still on-going. When I was drafting this introduction, the police were trying, badly, to take control of Mongkok, clearing roads by charging crowds and making forceful arrests.
Of the 139 sketches printed in this volume, about half were done in an A4-size (21 cm x 29 cm) sketch book, the other half on A3-size (30 cm x 42 cm) water-colour paper. The media used were pencil and felt marker (sign pen). Colour was added later with colour pencil - and also crayon when I ran out of yellow (the iconic colour of the HK Umbrella Movement/Revolution).
Having worked as a journalist, I decided that I should make a narrative by telling the five Ws: what, when, where, how and why. Therefore, the sketches are dated by the day the scene was captured, with its location specified. The short captions, I hope, can be strung together and read as a sequential story.
So, here they are, the raw images of what I have seen over the past two months. I would like to dedicate this collection to the new generation of Hongkongers who are fighting for their future.
Fong So
November 28, 2014 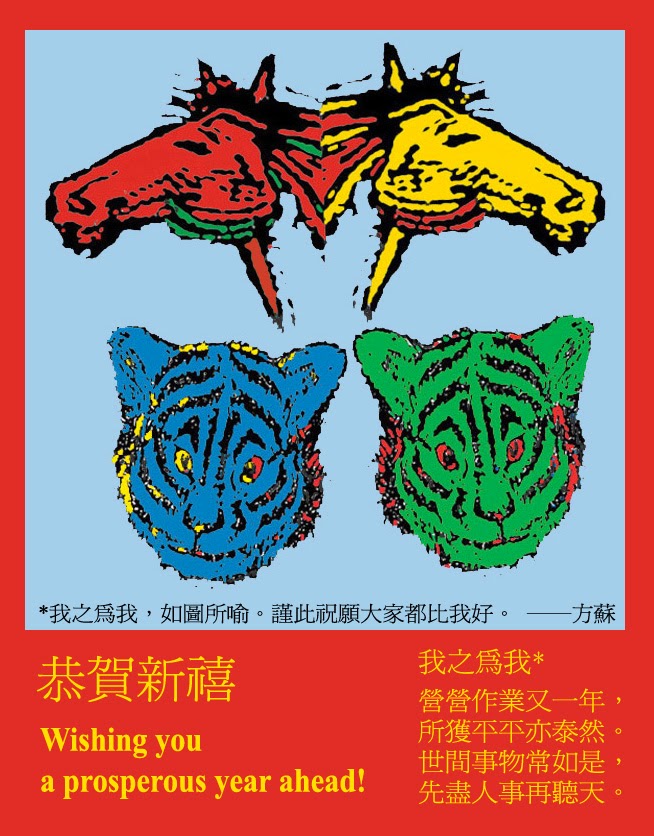 各位：
馬年伊始，一卡賀歲。
此圖所喻，是我自己。祝願你們都比我好！
Hi Friends,
Just an e-card for the Lunar New Year - the Year of the Horse.
Please don't get me wrong. The image of this card is about me, not you.
Yes, I have worked reasonably hard over the year. The result/return is just so so, but I don't mind.
Things are always like that. I just try my best and hope that fate will be in my favour.
As for you all, I hope that you are doing much better.
Wishing you a prosperous year ahead!
張貼者： Fong So 於 上午6:24 沒有留言: 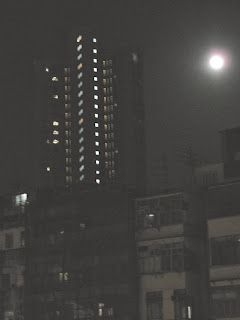 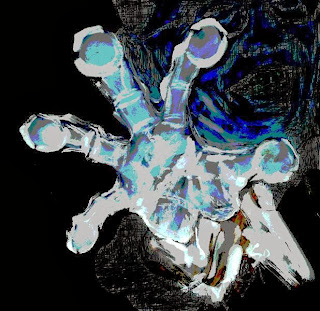 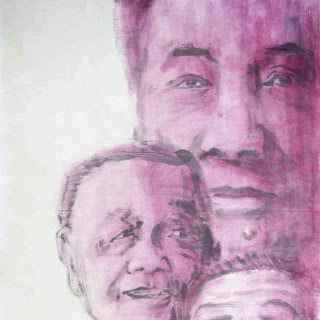 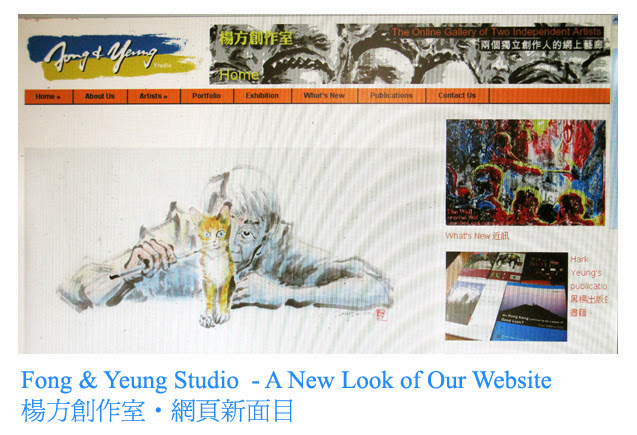 Website Revamped
We have been urged to revamp the website of Fong & Yeung Studio for quite a long time and we started to do it several months ago. Now that the work has been more than half complete. And we decided to launch it as early as possible to replace the old one.
The revamped website is an online art gallery. You can see our exhibitions and view the images of all the artworks. You can also place orders for our publications and contact us for price-list. We sincerely hope that all visitors of this website will find it more informative and user-friendly.
Yes, it's revamped, but not fully completed yet. Modification will continue.
Please visit us at: www.fong-yeung.com
Your valuable comments and suggestions will be most appreciated. Please contact us.
網頁更新
很多朋友早已認為我們要更新楊方創作室的網頁。我們這次全面更新，前後用了好幾個月，現在大體上完成了基本框架和過半數的內容。為了讓新網頁盡早與訪覽者見面，我們決定現在就上載，取代舊有的版本。
我們盡力將新網頁設計成網上藝廊。在這個網上藝廊，你可以看到我們的展覽，看到所有作品的圖像；你可以訂購我們的出版物，也可以聯絡我們查詢作品價目。我們希望新網頁對訪覽者能提供更多資訊和便利。
誠然，網頁已經更新，但仍須增加內容及作出改進。
請點擊閱覽：www.fong-yeung.com
我們期待你的寶貴意見和建議，請聯絡我們。
張貼者： Fong So 於 上午6:56 沒有留言: 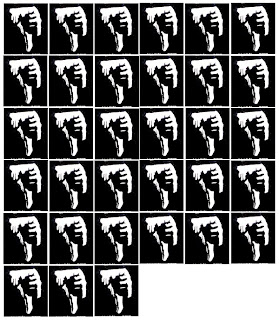 The Comic Daemons is a group newly formed by a number of local comic writers/artists with a view of drawing people's attention to the developments of a major social issue in Hong Kong – namely, the movement of Occupying Central. The group has decided to stage an exhibition entitled “Universal Suffrage Now” at two venues on both sides of the harbour in August, 2013. This is first time more than 20 cartoonists/artists group together to work on a social issue. The two venues are:
(1) PubArt Gallery (Ground Floor, 7B Chancery Lane, Central, Hong Kong);
(2) Woofer Ten (Ground Floor, 404 Shanghai Street, Kowloon) 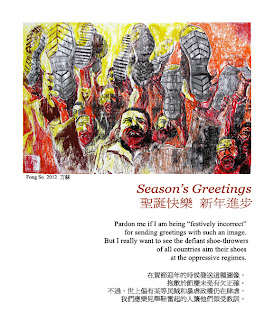 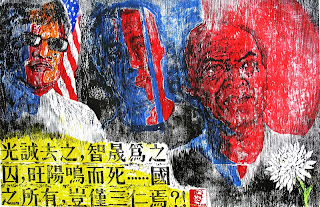 Festive Greetings  賀節迎年
I have been sending e-cards as festive greetings for some years, using the images from my artworks. Before preparing the e-card this year, I had several images ready. I must confess, most of them are “festively incorrect”. So finally I decided to go further away from “normal expectation” by selecting the most defiant and rebellious one - “The Shoe-throwers”.
Ponding how the image would be perceived, I added the following lines, in Chinese and English, to the e-card:-

Pardon me if I am being “festively incorrect”
for sending greetings with such an image.
But I really want to see the defiant shoe-throwers
of all countries aim their shoes
at the oppressive regimes.

The e-card was sent out a few days ago. It was almost immediately uploaded to Facebook by a friend who was among the first to receive my greetings. He did it half a day before I myself. As expected, over the past two days, I have received quite a number of friendly comments and remarks by emails and from the social networking site.
The e-card is posted here. What do you think about it? All comments welcome. Thanks.

(FYI, I have thought about using another image “The Three Men of Virtue”, instead of “The Shoe-throwers”. It's also posted here.)
張貼者： Fong So 於 下午6:56 沒有留言:

Fong So
Fong So is a journalist-turned artist. He was an editor of a current affairs magazine for 18 years. His works have been exhibited in Hong Kong, Korea and the UK. With the traditional Chinese medium of brush and ink, the content and genre of his work obviously differ from those of traditional Chinese painting. He also works on woodcut prints. He lives and works in Hong Kong. 方蘇原為新聞工作者，曾任時事刊物編輯十八年。近年從事繪畫，作品曾在香港、韓國及英國展出。他作畫採用傳統國畫的筆墨和工具，但題材及風格明顯地有異於傳統。繪畫之外，他也製作木刻版畫。